Showing posts with the label life lesson quotes
Show all 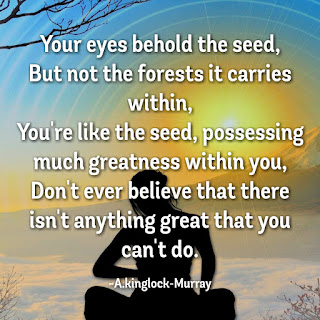 In case you were never told, believe from this day forward that you were born on purpose. You are no accident. You are no mistake. You are not useless!  It doesn't matter where in the world you were born. It doesn't matter if you are rich or poor. You must never accept anything less! It doesn't matter who believes in you as long as you believe in yourself. If a little seed possesses the ability to produce an entire forest. Can you imagine how much value lies within you? If God could have placed such significance on the output of a seed.  Can you imagine the significance He placed on you who is of far more value than a seed? The story is told of the mustard seed,  The Kingdom of Heaven is like a grain of  mustard seed , which a man took, and sowed in his field; which indeed is smaller than all seeds but when it is grown, it is greater than the herbs and becomes a  tree , so that the birds of the air come and lodge in its branches. If the smallest of all the seeds can produce
Post a Comment
Read more
More posts

All Comments
Hello, beautiful being 🤗🤗 Thank you for spending your precious time at the Drama-Free Club. Your presence is highly appreciated. Of all the things you could do and the places to be on the internet, you chose here. A warm welcome to you and happy reading. 😊😊

You can reach me here! I'll reply as soon as I can.